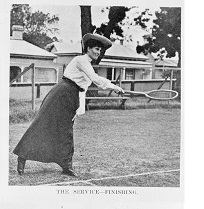 “Kathleen Nunneley was far and away the best woman tennis player in New Zealand in the late 1890s and early 1900s and though the game has changed out of sight, could still lay claim to being the best New Zealand has had.

Born in Leicestershire, Nunneley had one significant victory in England before she came to New Zealand in 1895. She beat Blanche Dingley who, as Blanche Hillyard, won the Wimbledon singles six times.

In New Zealand, Nunneley won the national singles title every year from 1895 to 1907 and gained a total of 32 national titles.

She won two mixed doubles titles with Anthony Wilding and could have been as successful at Wimbledon as he was had she had the opportunity.

Nunneley had her tennis gold medals made into a trophy which, as the Nunneley Casket, is at stake in interprovincial women’s tennis.” (http://www.nzhalloffame.co.nz/Inductees/N/Kathleen-Nunneley.aspx)