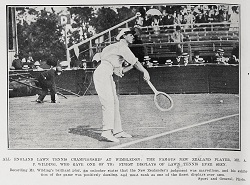 The son of a New Zealand cricketer and pioneer cricket administrator, Frederick Wilding, Anthony Wilding learned his tennis at the family home in Christchurch and won a series of national titles.

He went to Cambridge to study law but the tennis courts seemed to take more of his attention than the law torts. He won the Wimbledon singles title 1910-13 when the defending champion had to play only a challenge round, he helped the combined team of Australasia win the Davis Cup three times and he won a bronze medal at the Stockholm Olympic Games in the singles.

He was a successful and popular figure on the world tennis circuit that was then centred on the tourist spots of Europe. Wilding was also an accomplished competitive motorcyclist.” (http://www.nzhalloffame.co.nz/Inductees/W/Anthony-Wilding.aspx)

Anthony Wilding was killed in action in 1915.